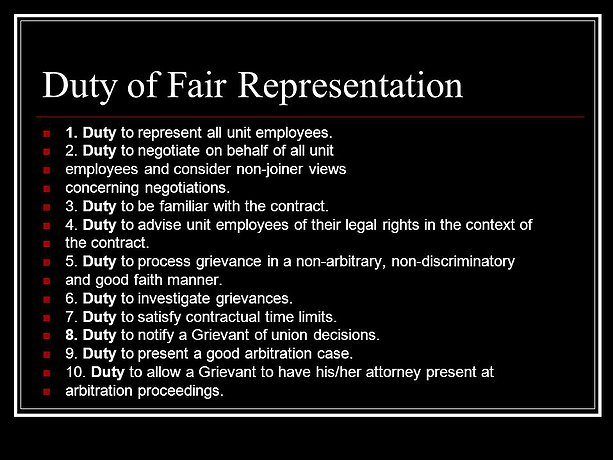 
Imagine this situation. Ralph thinks he has a problem and goes to his steward. “I didn’t get paid for the holiday last Friday,” he says.

“Do you know why?” the steward asks.
“My boss says it’s because I didn’t work the day before the holiday,” Ralph says.
“Well did you?” Joan the steward asks.
“No, but I had a good reason not to. My boss has been getting on my back and I needed to teach him a lesson, so I didn’t come in on Thursday.”
“You know the contract says you have to work the day before and the day after a holiday. We don’t like it, but for now that’s the way it is.” Joan says.

“Well, my boss is a jerk and I can prove it. I want to file a grievance.” Ralph insists.

WHAT SHOULD A STEWARD DO?
In LEOSU-DC we know that a big part of our job as a steward is to protect the gains we have won in our contracts, to fight to improve our wages, hours and working conditions, and to defend workers against injustice from management.

We also know that sometimes we have to defend workers that we or others may not personally like, because we must defend a principle bigger than the individual person.

Throughout the years a legal principle has been developed by the National Labor Relations Board called “the duty of fair representation” (DFR). This legal principle quite simply states that a union must represent all workers equally and without prejudice. A union cannot refuse to represent or improperly represent a worker due to the worker’s age, race, creed, nationality, sex, religion, political beliefs, union status or personality. If a union fails to represent a worker due to prejudice, or hostility, the union can be charged.

The duty to represent all workers is especially true in the case where a non-member or anti-union worker files a grievance. Personal feelings or the feelings of the membership cannot be allowed to interfere with the processing of that person’s grievance.

WHAT SHOULD BE DONE 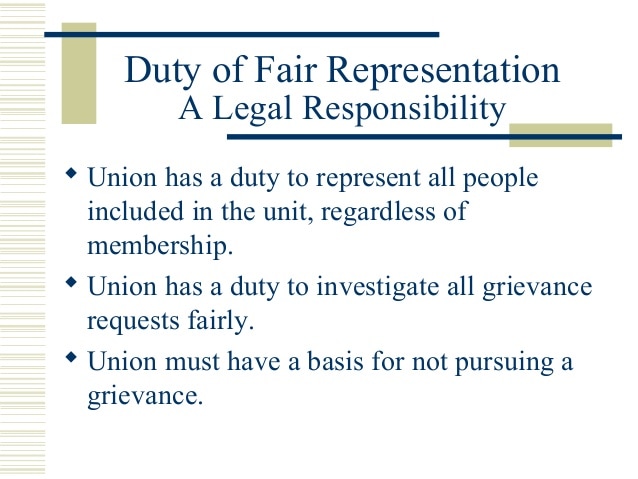 WHAT WE DON’T HAVE TO DO

We in the LEOSU-DC have always felt it is the role of the union to fight against any kind of discrimination or harassment a worker may be suffering related to their race, nationality or sex. “An injury to one is an injury to all.” If a worker approaches a steward or an officer and has a complaint of harassment or discrimination, it must be taken seriously. The incident must be investigated and, if necessary, action must be taken. If the harassment is coming from another worker the union must approach it just as seriously as if the harassment was coming from a member of management. Failure to help a worker who is the victim of harassment is wrong and can be a violation of the union’s duty of fair representation.

Following basic LEOSU-DC Policy IS the solution: “…pursue at all times a policy of aggressive struggle to improve our conditions.” This part of the Preamble to the LEOS-PBA Constitution says it all. The grievance procedure, and the union exist to improve the conditions of working people and by keeping this in mind we won’t have to worry about complaints of failing to represent the membership.

SO FINALLY, WHAT SHOULD STEVE DO?

​Steve goes and talks to some of the other stewards. None of them think David has a good case although there are some factors complicating the situation. One of them points out that the reason that the company demanded in the last negotiations that employees had to work the day before and the day after a holiday was because of a few people like David, who always took extra days off. Another steward points out that David's boss is a jerk and maybe he has been harassing Davis.

Steve decides to investigate more on the possible harassment of David. He is going to let Ralph present his case in the first step of the grievance procedure. He will try to make the discussion deal with the attitude of Ralphs’ boss. The stewards agree that Ralph doesn’t have a chance to get the holiday pay, so they won’t pursue that grievance past the first step, but they will pursue the question of harassment. They will also tell David that the way to deal with harassment is through the grievance procedure.