​Just Cause – Using the Seven Tests 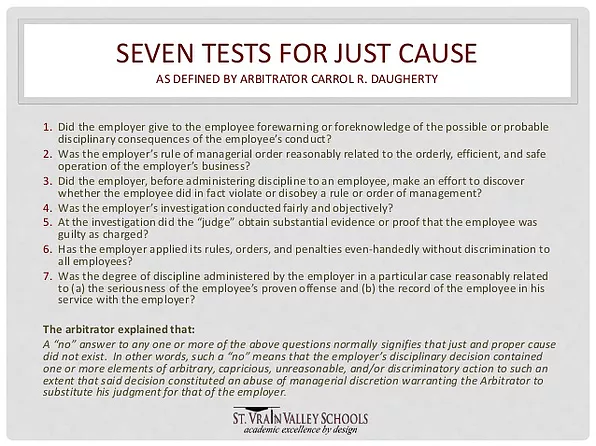 When management issues a disciplinary action towards a LEOSU-DC member, stewards will likely be the first to be approached by the affected member with many questions. Usually stewards will be asked questions about the discipline, such as, “Is this right?”, or “Can they do that?”

Here are the “Seven Tests” as to whether the boss has used “just cause” in discipline and discharge cases.

One of the main reason workers join unions is to gain protection against unfair and unjust discipline that employers hand out. Stewards must be ready to handle all sorts of discipline cases, from warnings to suspensions to firings. Stewards must be ready to deal with situations of gross discrimination by the boss on who gets disciplined to dealing with union members who sometimes seem to go out of their way to get themselves fired.

Our main contractual weapon is often times summed up in one short sentence, “Employees shall be disciplined or discharged only for just cause”. In some contracts the words used are “proper cause” or “fair cause”. The importance of a sentence like this is that it binds the employer to imposing discipline not just for any reason (cause) but the reason has to be a “just” reason. Many arbitrators have gone so far as to hold all employers to a “just cause” standard, whether the contract uses the words or not.

What is a “just cause” standard ? It is commonly accepted that there are seven tests as to whether a boss has used “just cause” in handing out discipline. The Bureau of National Affairs lists them as follows:

1. WAS THE EMPLOYEE ADEQUATELY WARNED OF THE CONSEQUENCES OF HIS CONDUCT?

​The warning may be given orally or in printed form. An exception may be made for certain conduct, such as insubordination, coming to work drunk, drinking on the job, or stealing employer property, that is so serious that the employee is expected to know it will be punishable.


2. WAS THE EMPLOYER’S RULE OR ORDER REASONABLY RELATED TO EFFICIENT AND SAFE OPERATIONS?

Example: A boss makes a rule that all employees must wear red tee shirts and they must be tucked in so they don’t get caught in machinery. An employee is fired for wearing a blue tee shirt that was tucked in. Making a rule that tee shirts must be tucked in so they won’t get caught in machinery may be reasonable and related to safety, but demanding the tee shirt be blue isn’t related to safety or efficiency.

3. DID MANAGEMENT INVESTIGATE BEFORE ADMINISTERING THE DISCIPLINE?

The investigation normally should be made before the decision to discipline is made. Where immediate action is required, however, the best course is to suspend the employee pending investigation with the understanding that he will be restored to his job and paid for time lost if he is found not guilty.

Example: The boss fires a worker for stealing and then demands evidence from the union that the worker isn’t guilty. At the grievance meeting the boss admits he never investigated the incident, just took another employee’s word. This probably wouldn’t hold up. If the union has facts to prove the employee’s innocence they should be presented to the boss, even though he failed to properly investigate the case.

4. WAS THE INVESTIGATION FAIR AND OBJECTIVE?

Example: If an incident happened does the employer interview  everyone present or only management people who were present. If the employer refuses to interview non-management workers then the investigation may not be fair.


5. DID THE INVESTIGATION PRODUCE SUBSTANTIAL EVIDENCE OR PROOF OF GUILT?

It is not required that the evidence be preponderant, conclusive, or “beyond reasonable doubt,” except where the alleged misconduct is of such a criminal or reprehensible nature as to stigmatize the employee and seriously impair his chances for future employment.

Example: Here it is obvious that workers have less rights inside the workplace than they would have in civil court, but still the boss must have real evidence, not guesses. Again the boss cannot just try to make a worker prove his or her innocence, without presenting proof of guilt.


6. WERE THE RULES, ORDERS, AND PENALTIES APPLIED EVENHANDEDLY AND WITHOUT DISCRIMINATION?

If enforcement has been lax in the past, management cannot suddenly reverse its course and begin to crack down without first warning employees of its intent.

Example: This is the most common form of discrimination. An employer decides to suspend Mary for taking too long at lunch, but lets the employees who eat lunch with a supervisor take extra time every day. This would not hold up. However, if the employer tells everyone that starting on Monday employees will be disciplined for taking too long at lunch and on Tuesday Mary comes back late and everyone else has been on time, she may be disciplined


7. WAS THE PENALTY REASONABLY RELATED TO THE SERIOUSNESS OF THE OFFENSE AND THE PAST RECORD?

If employee A’s past record is significantly better than that of employee B, the employer properly may give employee A lighter punishment than employee B for the same offense.

Example: The classic example is two employees get in an argument and shove each other. One has 25 years service with a clean record. The other has 3 years service with lots of warnings and discipline. Based upon the workers seniority and records, the employer may give the older worker less punishment than the other worker.

Here are some basic tips for stewards handling discipline and discharge cases: